The Persian Empire is the name used to refer to a number of historic dynasties that have ruled the country of Persia (Iran). Persia’s earliest known kingdom was the proto-Elamite Empire, followed by the Medes; but it is the Achaemenid Empire that emerged under Cyrus the Great that is usually the earliest to be called “Persian.” Successive states in Iran before 1935 are collectively called the Persian Empire by Western historians.

But In 1959 due to controversial debates over the name, it was announced that both could be used. Achaemenes (chieftain of the Persians) was the founder of the first Persian state (Achaemenids). The first credible claim for the development of a real postal system comes from Persia. Iran was in the heart of the Silk Road, with a length of more than 8000 km, connecting Persia to China. 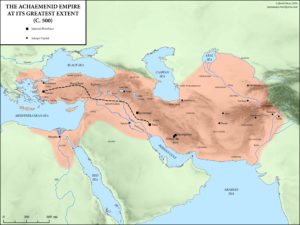 In the 6th century, BC Cyrus the Great founded the Persian Empire, which was destroyed in 330 BC by Alexander the Great. In succeeding centuries, Persia was invaded by the Parthians, the Arabs, the Mongols, and various Turkish dynasties. After the Arab conquest in the middle of the 7th century, the ancient Persian religion of Zoroastrianism gave way to Islam.

The western part of the Iranian plateau was inhabited by various peoples whose relationships to each other and whose languages are hardly known. Their culture was materialistic which was depicted by the use of gold and silver in their objects. Bronze objects from LURISTAN, mostly from graves, are evidence of great artistic originality. 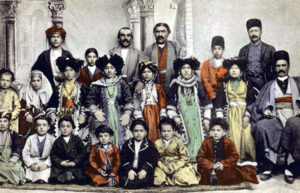 Iran is situated east of Iraq, beyond the Tigris River, Shatt Al-Arab waterway and east of the Persian Gulf, across from Saudi Arabia. To the north, it borders on former Soviet Central Asian countries including Armenia Turkmenistan, Azerbaijan, and the Caspian Sea. It also borders on Afghanistan and Pakistan in the east, and Turkey to the west.

The seventh-century Arab conquest of Iran, which introduced Islam to the population, was followed by invasions by the Seljuk Turks and the Mongols. Iran experienced a political and cultural revival under the Safavid dynasty (1502-1736), during which Shah Abbas expelled the Uzbeks and Ottomans from Persia.

Throughout Iran’s long history, in spite of different devastating invasions and occupations by Arabs, Turks, Mongols, British, Russians, and others, the country has always maintained its national identity and has developed as a distinct political and cultural entity.