In ancient Persia, monarchs and rulers used the striking of coins whether in gold or silver to represent their authority over their own people and their neighboring states.

The institution of the first distinctively Persian coinage is credited to Darius I (522-486 BC). He issued gold coins, which became famous as “darics”. Their design depicted the king in a running position holding a spear or bow. By the order of King Darius the Great, the first Iranian coin was minted in the late 6th century B.C. as golden Darick. 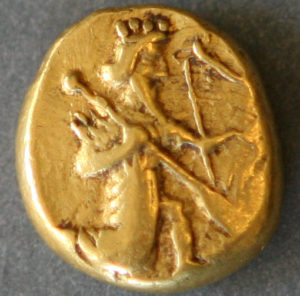 The vast majority of Parthian drachms were struck on oval flans with the portrait perpendicular to the long axis. When the Parthian kings began to strike coins towards the end of the 3rd century B.C. they followed the Attic weight standard of about 4.25 g. for their silver drachms.

The Sassanid coins had an original Persian pattern and were minted in gold, silver & copper. Golden Sassanid Drachma was only used in foreign trading so they are nearly rare today. Used as the main currency, silver coins were in circulation even in neighbor regions. 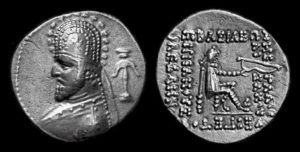 It is estimated that for more than 1.5 billion silver coins were kept in the treasury as the reserve of the country. This is apart from other valuable jewels & masterpieces such as the heavy crown of the king, Golden Shabdiz (Corpse of King Khosrow Parviz’s horse that was filled with gold), the gemmed Baharestan carpet & so many other items. For over 100 years, coins were minted in the style of Sassanid era with minor changes.

The characteristic feature of Islamic coins is the inscription of ‘Bismillah’ (‘in the name of Allah’) or Lillah Al-Hamd (‘to Allah be the praise’) in the margin. The royal name is replaced by that of an Arab governor and each coin is precisely dated.

In the early 1970s, the size of 10 Rials. coins were decreased and the new 20 Rls. The coin was minted and for the first time, the portrait of Shah Mohammad Reza Pahlavi was depicted on the currencies similar to gold coins. This pattern continued until the 1979 revolution.