Here is a history of the new year in Persia / Persian New Year History:

Nowruz marks the first day of spring and the beginning of the Iranian year. It is celebrated on the day of the astronomical vernal equinox (the start of spring in the northern hemisphere), which usually occurs on March 21 or the previous/following day depending on where it is observed.

This ancient festival has been celebrated for thousands of years ever since the birth of the Zoroastrian religion in Persia. Persians celebrated the last 10 days of the year in the annual feast of souls, Hamaspathmaedaya, Farvardigan or popularly Forodigan). 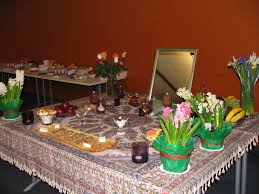 They believed Foruhars, the guardian angels for humans and the spirits of the deceased would come back for a visit. Persian New year views fresh spring flowers to be a very important component of this celebration, and sending flowers to your Persian friends, family members and other loved ones on this day is a great way to show how important this holiday is to you.

During Persian New Year, Norooz, many delicious dishes are prepared and enjoyed with the whole family. Some of them include Sabzi Polo which is a rice dish with fish topped with delicious green herbs, Reshteh Polo a noodle dish which is said to help one succeed in life and is a perfect dish to welcome the New Year, 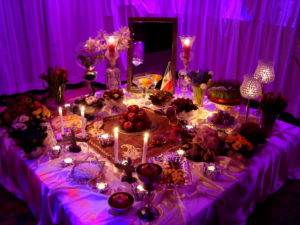 Dolme Barg a vegetable and meat dish that is said to bring about one’s wishes in the upcoming year, and Kookoo sabzi which is a vegetable soufflé with plenty of herbs, eggs, and walnuts- this dish is served on New Years.

There should be a dish of greens, which usually consist of freshly sprouted wheat or lentils, grown in a dish or tray, a symbol of rejuvenation of life. In addition to these traditional items, the table may also be decorated with candles, milk, cheese, eggs colored and painted, cakes and sweetmeats and goldfish in a bowl. The goldfish is believed to be a sign of unexpected favors that will be received. 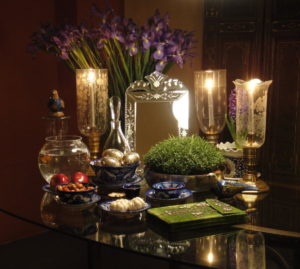 The 13th day of the new year in Persia is called “Sizdah Bedar” and spent mostly outdoors. People will leave their homes to go to the parks or local plains for a festive picnic. It is a must to spend Sizdah Bedar in nature.

In this day, people throw the Sabze away, they believe Sabze should not stay in the house after “Sizdah Bedar”. Iranians regard the 13th day as a bad omen and believe that by going into the fields and parks they avoid misfortunes.

The term Nowruz first appeared in Persian records in the second century AD, but it was also an important day during the time of the Achaemenids (c. 648-330 BC), where kings from different nations under the Persian empire used to bring gifts to the emperor (Shahanshah) of Persia on Nowruz. Earth, waters, sky, animals, plants, justice, honesty, peace, health, beauty, joy and happiness belonged to the good forces.