The Persian cuisine is ancient, diverse as well as cosmopolitan. Eating habits and products from ancient Greece, Rome, and many Asian and Mediterranean cultures have influenced this unique cuisine.

Women have had a great influence on the history of cooking in Iran. The best chefs were and still are women. From the palaces of the Persian kings to the average housewife, women have had fabulous skills in preparing exquisite cuisine. 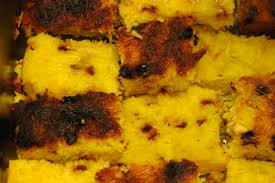 Most men did not cook but expect the best food from their wives or mothers. Even for weddings and major parties when catering services were used or hired, the food was expected to be the same quality as the best homemade food.

It has borrowed spices, styles and recipes from India and has conversely also influenced Indian food. There are many dishes that are shared by both Iranians and Turks to the extent that it is hard to say who has borrowed what and from where. The archives at the major ancient Persian cities contain names of many food products, ingredients, beverages, herbs, spices.

The wine was considered as an important ceremonial and religious drink. Basil, mint, cumin, cloves, saffron, and coriander were traded along with olive all over the ancient trade routes. 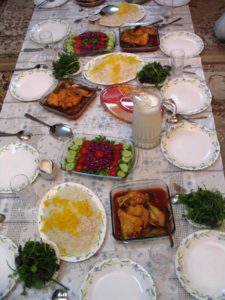 The Parthian and the Sasanian records further also made a mention of walnut, pistachio, pomegranate, cucumber, broad bean, pea and sesame in their trade records.

The ancient physicians were also influenced by the Greek sciences considered food and beverages important factors to revive the body. Excessive consumption of too much red meat and fats was thought to upset body’s balance. On the other hand, a balanced combination of fruits, vegetables, poultry, herbs, seeds and mixed petals and blossoms of roses was regarded as a very good diet capable of strengthening body and mind.

The ideas of cold and hot foods are still today practiced by several Iranians and in planning for meals such considerations are often attended to. From region to region, the classifications may vary. Generally speaking, animal fat, poultry, wheat, sugar, some fresh fruits and vegetables, and all dried vegetables and fruits were considered hot while beef, fish, rice, dairy products, fresh vegetables, and fruits are considered as cold. 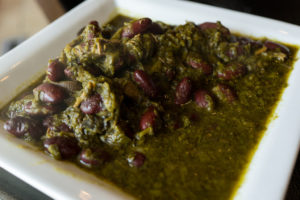 In planning for meals people’s nature, season or illness will be considered and cold or hot or a combination of the two foods will be produced. For instance, walnut, a hot food is usually combined in a dish that includes pomegranate, a cold food, to make the dish balanced and delicious.

Or a variety of pickles are consumed when eating fatty or fried foods to neutralize the effect of too much fat. Iranians or Persians were avid consumers of dairy products and till today many make their own yogurt and cheese at home.

Central to the Persian cooking were the numerous rice dishes, some containing almonds, pistachios, glazed carrots or orange peels, and raisins; others with vegetables and spices; occasionally with meat. Most often perfected and finished by the use of specially prepared saffron from Iran and cooked slowly after boiling to have a hard crust at the bottom (tahdig). 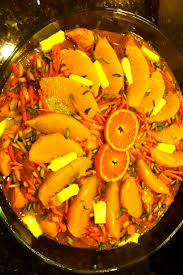 Other recipes included stews, dumplings, kebabs, and stuffed vegetables accompanied by different sauces. The sweetmeats and pastries were particularly delicious. Many of the dishes were vegetarian, and the mixing of sweet and savory, such as grains stewed with fruit and spices produced unique meals.

The result was a feast of flavors and textures as well as a visual delight. Most cooking was done from scratch and ready-made products and previously prepared ingredients such as frozen mixed herbs were not acceptable to many particularly to the older generation.

Iranians also used a variety of bread. The bread was mostly flat and baked in special ovens similar to clay ovens in Indian restaurants. The bread was bought fresh every day and sometimes for each meal. They were not the same quality as the bread in Iran and were baked in modern conventional ovens and some are similar to the Greek pita bread if not identical.

Along with food, the Persian people also prepared fresh sherbets and many different kinds of herbal drinks at home. Many Iranians consumed all kinds of alcoholic beverages and did not follow the Islamic ban on alcohol. 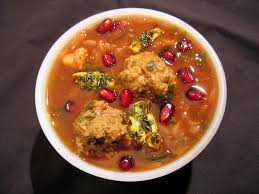 Iranians were great consumers of all kinds of meat except pork for those who follow the religious codes. The meat has to be slaughtered in a certain way according to religious prescription. The people who followed such practices purchased their meat from special halal Meat shops.

Halal means permitted and was normally referred to shops selling meat slaughtered according to the Islamic prescribed codes. These shops were located in every major city and were hence easy to access.

Iranian food was varied and changed from area to area and there were also many great cookbooks published in every language making the cuisine available internationally. Rice was a major ingredient and was cooked very differently from Indian or oriental rice. Iranians used Indian basmati rice. 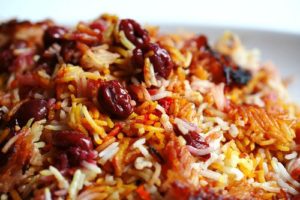 Iranians refined the taste, flavor of food along with how it is presented. Iranians cooked depending upon the ongoing season in order to ensure that the food was fresh and also of the best quality possible. Fragrances during cooking, and at the table played a special role in the Iranian culture, so also did the presentation of the food.